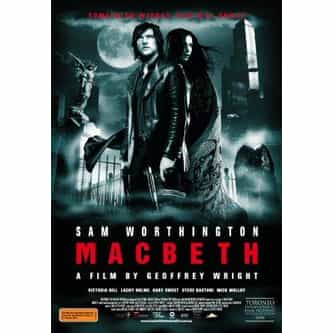 Macbeth is a 2006 Australian adaptation of William Shakespeare's Macbeth. It was directed by Geoffrey Wright and features an ensemble cast including Sam Worthington, Victoria Hill and Lachy Hulme. Macbeth, filmed in Melbourne and Victoria, was released in Australia on 21 September 2006. Wright and Hill wrote the script, which — although it uses a modern-day Melbourne gangster setting, and the actors deliver the dialogue in Australian accents — largely maintains the language of the original ... more on Wikipedia

Macbeth IS LISTED ON

movies based in the 80s, sit next to me lyrics, movies with only one actor, 1994 animated movies, best multiplayer strategy games on steam, frank stallone movies, best wuxia films, best switch games under 30, bands like metallica, list of filmation cartoons