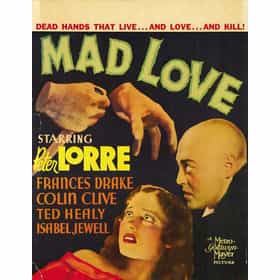 Mad Love is a 1935 American horror film, an adaptation of Maurice Renard's story The Hands of Orlac. It was directed by German-émigré film maker Karl Freund, and stars Peter Lorre as Dr. Gogol, Frances Drake as Yvonne Orlac and Colin Clive as Stephen Orlac. The plot revolves around Doctor Gogol's obsession with actress Yvonne Orlac. When Stephen Orlac's hands are destroyed in a train accident, Yvonne brings him to Gogol, who claims to be able to repair them. As Gogol becomes obsessed to the point that he will do anything to have Yvonne, Stephen finds that his new hands have made him into an expert knife thrower. Mad Love was Freund's final directorial assignment and ... more on Wikipedia

Mad Love is ranked on...