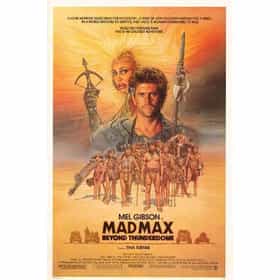 Mad Max Beyond Thunderdome, also known as Mad Max 3: Beyond Thunderdome or simply Mad Max 3, is a 1985 Australian post-apocalyptic action adventure film co-directed by George Miller and George Ogilvie, written by Miller and Terry Hayes and starring Mel Gibson and Tina Turner. It is the third installment in the action movie Mad Max series, its story taking place 15 years after that of the previous film. The original music score was composed by Maurice Jarre. This is the last film to feature Gibson as Max Rockatansky, who will be replaced by Tom Hardy in the upcoming Mad Max: Fury Road. It is the first, and currently only, film in the series to be rated PG-13 by the Motion Picture ... more on Wikipedia

Mad Max Beyond Thunderdome is ranked on...

#795 of 6,106 The Best Movies Of All Time 5.7M VOTES These are the best movies of all time, ranked by movie experts and film fans alike. What are the greatest movies in cinema h...
#141 of 571 The Greatest Movies Of The 1980s, Ranked 524.7k VOTES Since it was one of the greatest decades for film, here's a list of the best movies of the 80s. These are the most popu...
#70 of 159 The Best Science Fiction Action Movies 93.8k VOTES In space, no one can hear you scream... but everyone else in the movie theater can. If you're searching for a gasp-worthy fl...
#216 of 710 The Best Movies Roger Ebert Gave Four Stars 163.4k VOTES List of movies Roger Ebert gave four stars, ranked best to eh. This is NOT a complete list of all of Roger Ebert's four star...
#185 of 233 The Worst Sequels Of All Time 77.2k VOTES The worst movie sequels from throughout film history. These are the follow-up films in a franchise or reboots that brought t...
#191 of 568 The Greatest Disaster Movies of All Time 98.7k VOTES These are the most entertaining, the most fun, the greatest disaster movies ever made, ranked by movie experts and film fans...
#22 of 135 People who voted for Mad Max Beyond Thunderdome... People in the Northeast are 2x more likely to vote for this The Best Movies of 1985 23.3k VOTES A list of the best movies of 1985, from instant classics like Back to the Future to cult hits like The Goonies. The '80s w...
#25 of 107 The Best Third Films In A Movie Series 28.1k VOTES Threequel: the third (and often final) movie in a series. A third film that follows the original and the sequel. With the ne...
#129 of 566 The Greatest Sci-Fi Movies of All Time 563.6k VOTES What are the greatest sci-fi movies of all time? Science fiction films are among the most popular movies in cinematic h...
#24 of 108 The Best Apocalyptic And Post-Apocalyptic Movies 31k VOTES We all love a good apocalypse -- as long as it's fictional, of course. Whether you prefer the rip-roaring action of the Max ...
#73 of 165 The Very Best Survival Movies 20.9k VOTES A list of the best survival movies. All of the best survival films have been included, but if you feel we somehow missed one...
#107 of 324 The Best Warner Bros. Entertainment Movies List 5.8k VOTES List of Warner Bros. Entertainment movies, ranked best to worst, including trailers, genres, and release dates. Warner Bros....
#20 of 50 The Best Mel Gibson Movies 14.6k VOTES This list of the best Mel Gibson movies is ranked best to worst and includes movie trailers when available. Mel Gibson solid...
#4 of 4 Every 'Mad Max' Movie, Ranked Best to Worst 297 VOTES These are the best Mad Max movies the franchise has to offer. Max has been thrilling fans of post-a...

Mad Max Beyond Thunderdome is also found on...