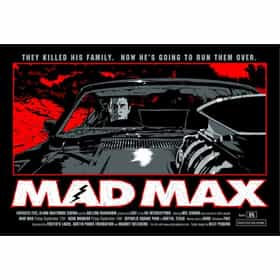 Mad Max is a 1979 Australian dystopian action film directed by George Miller, produced by Byron Kennedy and starring Mel Gibson. James McCausland and Miller wrote the screenplay from a story by Miller and Kennedy. The film grossed substantially at the box office and held the Guinness record for most profitable film for decades and has been credited for further opening up the global market to Australian New Wave films. The film became the first in a series, spawning the sequels Mad Max 2 in 1981 and Mad Max Beyond Thunderdome in 1985. A fourth installment, Mad Max: Fury Road starring Tom Hardy as Max, is scheduled for release in May 2015. ... more on Wikipedia

Aliens
Artists Imagine What All Your Favorite Pop Culture Characters Would Look Like In Mad Max: Fury Road 4.5k votes Mad Max: Fury Road rammed its way onto the scene in 2015 and it show no signs of leaving any time soon. In fact, the film fi...
20 Things You Didn't Know About the Mad Max Movies 4.5M views The original Mad Max trilogy did a whole lot in the way of action movies. It redefined the chase scene, it brought a very sp...
Which Post-Apocalyptic World Would You Survive Based On Your Zodiac Sign? 10.9k views The world is a cruel place, but it's significantly crueler after the apocalypse. That's part of the reason post-apocalyptic ...
Mad Max: Fury Road Movie Quotes 103 votes Mad Max: Fury Road movie quotes follow the action as the post-apocalyptic Mad Max film series continues in a fourth installm...
The Craziest Quotes From 'Mad Max' 44 votes The best quotes from Mad Max make you realize how great the movie really is, even if you haven't seen it in a while. Let's r...

Mad Max is also found on...