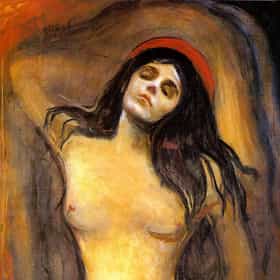 Madonna is the usual title given to a composition by the Norwegian expressionist painter Edvard Munch. Munch painted several versions of the composition, showing a bare-breasted half-length female figure, between 1892 and 1895, using oils on canvas. He also produced versions in print form. The version owned by the Munch Museum of Oslo was stolen in 2004 but recovered two years later. Two other versions are owned by the National Gallery of Norway and the Kunsthalle Hamburg. Another one is owned by businessman Nelson Blitz, and one was bought in 1999 by Steven A. Cohen. The lithographic print of the composition is distinguished by a decorative border depicting wriggling sperm, with a ... more on Wikipedia

Madonna is also found on...