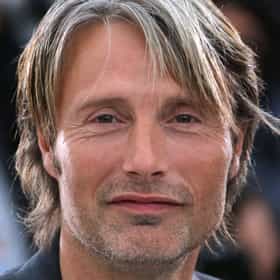 Mads Dittmann Mikkelsen, (Danish: [mæs ˈmikl̩sn̩] (listen); born 22 November 1965) is a Danish actor. Originally a gymnast and dancer, he began acting in 1996. He rose to fame in Denmark as Tonny the drug dealer in the first two films of the Pusher film trilogy, and in his role as the brash yet sensitive policeman, Allan Fischer, in Peter Thorsboe's Danish television series Rejseholdet (Unit One) (2000–03). Mikkelsen became more widely known for his role as Tristan in Jerry Bruckheimer's production King Arthur (2004), but achieved worldwide recognition for playing the main antagonist Le Chiffre in the twenty-first James Bond film, Casino Royale (2006). He has since become known ... more on Wikipedia

Mads Mikkelsen is ranked on...

#83 of 194 The Hottest Men Over 40 1.2M VOTES The hottest men in Hollywood? Turns out, the older they get, the more we like them! Like fine wines, tweens, and your favori...
#319 of 1,139 The Best Actors in Film History 2.3M VOTES The best actors ever are ranked here in this list of the best actors in film history. These are the greatest actors ever to ...
#164 of 329 The Greatest Actors Who Have Never Won an Oscar (for Acting) 470.4k VOTES There are many actors who haven't won an Oscar. For 95 percent of the acting population, there is probably a good reason the...
#259 of 532 People who voted for Mads Mikkelsen... People outside of the US are 2x more likely to vote for this Famous Men You'd Want to Have a Beer With 1.8M VOTES If given the opportunity to sit down for a beer with any famous male figure, which famous men would you most want to get a d...
#108 of 129 Celebrities You'd Let Babysit Your Kid 68k VOTES Parents need to be extra careful when choosing a babysitter for your children, and picking a celebrity babysitter invol...
#24 of 265 The Greatest Male Celebrity Role Models 107.3k VOTES Male celebrities as role models... what are we looking for? Maybe someone who knows how to lead, be a good team member, or h...
#17 of 19 The Hottest Leading Men In Period Film 9k VOTES Who says history buffs don't enjoy a few buff men in their history? As much as our modern day sensibilities might not always...
#69 of 69 2013 TV Awards: Best Actor in a Network Drama 58k VOTES This list of 2013 TV awards is for best actor in a network drama series, so add your picks, please. A slew of great networ...
#9 of 14 Actors Who Proved Rebooting Iconic Roles Can Be A Good Thing 49 VOTES When a particular performance transcends the film it’s in and enters pop culture, even the whisper of reimagining it with a ...
Who Were Marvel Cinematic Universe Stars' Favorite Superheroes Growing Up? 4.1k VIEWS The countless talented actors in the Marvel Cinematic Universe have almost become the equivalent of Greek gods in our modern...
50+ Celebrities Who Turned 50 in 2015 12.7M VIEWS Quick. How much does it cost to buy 50 candles? Because these hot celebs have a big birthday coming up! This list of actor...

Mads Mikkelsen is also found on...