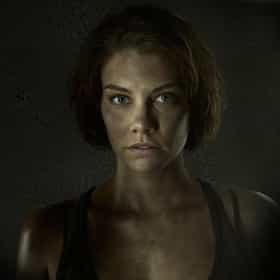 Maggie Greene is a fictional character from the comic book series The Walking Dead, portrayed by Lauren Cohan in the television series of the same name. She is Hershel Greene's daughter and Glenn's wife. In both mediums, Maggie and Glenn form a relationship and eventually become a married couple. In the comic book series, Maggie, Hershel's second daughter of seven children, becomes the surrogate mother to Sophia Peletier following the suicide of the girl's biological mother. Maggie initially has insecurities about herself and appears physically and emotionally weak. However, as time passes, Maggie hardens and becomes severely independent. She leaves the Alexandria Safe Zone and ... more on Wikipedia

Maggie Greene is ranked on...