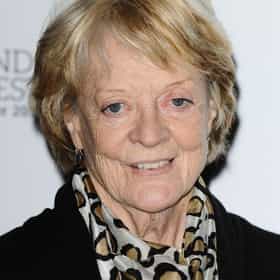 Dame Margaret Natalie Smith (born 28 December 1934) is an English actress. She has had an extensive, varied career on stage, film, and television, spanning over 67 years. Smith has appeared in more than 50 films, and is one of Britain's most recognisable actresses. She was made a Dame by Queen Elizabeth II in 1990 for contributions to the performing arts, and received the Companion of Honour from the Queen in 2014 for services to drama.Smith began her career on stage as a student, performing at the Oxford Playhouse in 1952, and made her professional debut on Broadway in New Faces of '56. For her work on the London stage, she has won a record five Best Actress Evening Standard Awards: ... more on Wikipedia

Maggie Smith is ranked on...

Maggie Smith is also found on...