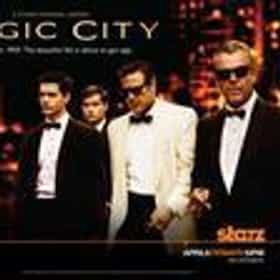 Magic City is an American drama television series created by Mitch Glazer for the Starz network. Starz previewed the premiere episode on March 30, 2012. It premiered on April 6, 2012. Starz renewed the series for an eight-episode second season on March 20, 2012. The series was canceled on August 5, 2013 after two seasons. Set in 1959 Miami, Florida shortly after the Cuban Revolution, Magic City tells the story of Ike Evans, the owner of Miami's most glamorous hotel, the Miramar Playa. Evans is forced to make an ill-fated deal with Miami mob boss Ben Diamond to ensure the success of his glitzy establishment. ... more on Wikipedia

Magic City is ranked on...

#72 of 134 The Best of Premium Cable TV Series 187.9k VOTES Best cable series on premium cable includes some of the greatest TV shows in history. This list of premium cable original pr...
#24 of 28 What to Watch If You Love Mad Men 246 VOTES If you’ve just finished Mad Men, congratulations. It’s an outstanding show. Now, however, you’re probably wondering what to ...
#55 of 63 The Most Anticipated Summer 2013 TV Shows 11.1k VOTES The most anticipated summer 2013 TV shows include several returning series that consistently attract millions of viewers, bu...
#62 of 86 The Best Period Piece TV Shows 14k VOTES The very best period piece shows on television, ranked from best to worst. This list of the greatest period piece shows. The...
#35 of 49 The Greatest TV Shows Set in the 1960s 961 VOTES The 1960s were a wild time to be alive, which is shown in the best TV shows set in the '60s. From the birth of cla...
#33 of 34 The Best 2010s Historical Drama Series 8.4k VOTES These are they best 2010s historical drama series, ranked from best to worst by user votes. From some good 2010s historical ...
#18 of 35 The Best Starz! TV Shows 8.2k VOTES This list of the top current and cancelled Starz! TV series includes the date when each show first aired, as well as which a...