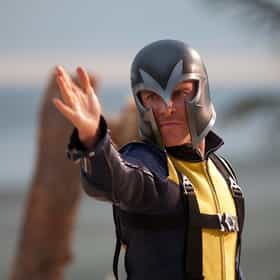 Magneto is a fictional character appearing in American comic books published by Marvel Comics, commonly in association with the X-Men. He has been the primary villain in the X-Men comics, although, he has been an occasional ally and even a member of the X-Men at times. Created by writer Stan Lee and artist Jack Kirby, the character first appears in The X-Men #1. A powerful mutant with the ability to generate and control magnetic fields, Magneto desired mutants to eventually dominate the human race as he viewed humans as an outdated species that no longer deserves its continual domination over the world. Writers have since fleshed out his character and origin, revealing him to be a ... more on Wikipedia

The Best Storylines That Feature Magneto 69 votes In all of comic book history, you would be challenged to find a villain as well-established and detailed as Magneto. Ever si...

Magneto is ranked on...

#3 of 110 People who voted for Magneto... also upvote X-Men Franchise on The Best Movies Based on Marvel Comics also upvote X-Men Franchise on The Best Superhero Movies Ever Made The Greatest Marvel Villains & Enemies Ever 405.8k VOTES The best Marvel villains are the men and women (not to mention any aliens, robots, and even siblings of heroes) at the root ...
#7 of 961 People who voted for Magneto... also upvote X-Men Franchise on The Best Superhero Movies Ever Made also upvote Dark Knight Franchise on The Best Superhero Movies Ever Made The Greatest Movie Villains of All Time 1.2M VOTES While some of us tend to despise movie villains, plenty of movie-goers favor some of these antagonists. Whether that's ...
#4 of 13 Marvel Superheroes Who Should Stop Fighting Villains and Really Save the World 9.5k VOTES Spider-Man's uncle Ben once said “with great power comes great responsibility.” Truly words of comic-book wisdom. ...
#11 of 20 Comic Book Characters Who Deserve R-Rated Adaptations 5.3k VOTES R-rated superhero movies don't always do well financially, but Deadpool and Logan achieved great box office s...
#8 of 54 The Best Villains Deadpool Has Ever Faced 27.7k VOTES The Merc with a Mouth, or Deadpool, was created in 1991 by writer Fabian Nicieza and comic illustrator Rob Liefeld. Though D...
#13 of 15 15 Movie Villains You Could Outsmart 2.6k VOTES Imagine you're a scary cinematic supervillain intent upon destroying your adversaries and - likely - the entire wo...
#8 of 72 List of Marvel Vs Capcom Characters 5.5k VOTES We compiled a list of all Marvel Vs Capcom characters across every MVC game. Characters in the Marvel Versus Capcom game ser...
#7 of 80 The Greatest Avengers Villains of All Time 64.4k VOTES The Hulk, Iron Man, and Thor had been fighting crime separately in the pages of Marvel Comics, each having their own share o...
#6 of 27 The Best Superhero Capes & Cloaks in Comics 8.3k VOTES Capes couldn't be more associated with superheroes. Not every superhero wears a cape, and in today's comic's not many superh...
#5 of 15 15 Of Your Favorite Comic Book Characters Who Have Been De-Aged 403 VOTES When Guardians of the Galaxy Vol. 2 hit theatres in 2017, Baby Groot stole our collective hearts, along with our collective ...
#1 of 20 The Best Archenemies in Marvel Comics 10.9k VOTES Archenemy, arch-rival, arch-nemesis whatever you want to call it, it's personal. The yin to the yang, the polar opposite, th...
#18 of 23 This Guy Turns Your Favorite Pop Culture Characters Into Adorably Curvy Icons 1.1k VOTES Fat pop culture fan art from Alex Solis is bold and beautiful, but you can let his awesome collection of curvy, Hollywo...
#15 of 20 The Greatest Defenders Villains Ever 1k VOTES The Defenders are very much like the Avengers, and as such, share a fair amount of their villains. But The Defenders being s...
#19 of 20 The Greatest Foes of Namor the Sub Mariner 1.6k VOTES Namor the Sub Mariner was one of Marvel Comics very first characters. In fact he's been around since before Marvel was even ...
#14 of 37 The Best Anti-Heroes in Comics 206k VOTES An anti-hero is defined as a leading character in a story who lacks traditional heroic qualities such as idealism, courage, ...
#15 of 29 The Best '90s Superhero Cartoon Voice Over Actors 9.3k VOTES Voice acting may be the most important element of a successful animated show, and though the voice acting in superhero car...
List of All Brotherhood of Evil Mutants Members 6.1k VIEWS Here is the full roster of the Marvel Comics supervillain team, the Brotherhood of Evil Mutants, one of the most p...
#1 of 237 X-Men Villains 1.6k VOTES The Uncanny X-Men have as many comic book villains (and the hottest X-Men women) as Jay Leno has cars. Meaning a lot. Bad gu...
#7 of 34 The Best Comic Book Characters With White Hair 309 VOTES The greatest comic book heroes and villains with white and gray hair, ranked by fans everywhere. In the real world, white ha...
The Essential Auto Parts Guide 286.3k VIEWS A list of essential car parts, all manufactured components of automobiles. There are hundreds of small parts that come toget...
The 20 Richest Comic Book Characters of All Time 783.5k VIEWS Here's a list of the richest superheroes, comic book characters and wealthiest villains of all time, ranked from richest to ...
List of All New Mutants Members 3.1k VIEWS Here is the full roster of the Marvel Comics superhero team, the New Mutants, one of the most published superhero&...
The Full List of X-Men Characters & Members 2.5M VIEWS This is a complete roster of all X-Men comic book characters, and X-Men team members with images. What Marvel Comics charact...
Which Supervillain Would You Be, According To Your Zodiac Sign? 99.5k VIEWS Darkness can't exist without light, similarly to how good can't exist without evil. For every superhero, there needs to be a...
Every Single Time Mystique Transforms in the X-Men Movies 15.5k VIEWS The shape-shifting mutant known as Mystique appears in all five of the main X-Men movies. She's played by Jennifer Lawrence ...
#22 of 32 The Best New Mutants Members, Ranked 2.7k VOTES Here is the full roster of the Marvel Comics superhero team, the New Mutants. Created by Chris Claremont and Bob M...
#1 of 37 The Best Michael Fassbender Characters 585 VOTES Michael Fassbender characters list, ranked from best to worst along with movie clips when available. These roles are ordered...
#10 of 20 Easy Costumes If You Already Have A Brown Jacket 128 VOTES With Halloween closing in fast, it's time to turn to your closet and see if you have anything that you can make a last-minut...
Top 100 Most Popular Superheroes and Villains in Comic Books 116.1k VIEWS These are the superhero (and villain) characters who have been in the most individual issues of comic books, including ...
Things You Need to Know About the New X-Men in Apocalypse 32.9k VIEWS With every new X-Men movie, fans meet new mutants joining the franchise, and also catch up with familiar characters in entir...

Magneto is also found on...