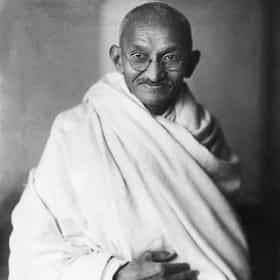 Mohandas Karamchand Gandhi (; 2 October 1869 – 30 January 1948) was an Indian lawyer, anti-colonial nationalist, and political ethicist, who employed nonviolent resistance to lead the successful campaign for India's independence from British Rule, and in turn inspire movements for civil rights and freedom across the world. The honorific Mahātmā (Sanskrit: "high-souled", "venerable"), first applied to him in 1914 in South Africa, is now used throughout the world. Born and raised in a Hindu family in coastal Gujarat, western India, and trained in law at the Inner Temple, London, Gandhi first employed nonviolent civil disobedience as an expatriate lawyer in South ... more on Wikipedia

Mahatma Gandhi is ranked on...

#30 of 926 People who voted for Mahatma Gandhi... People over 50 are 2x more likely to vote for this People We Wish Were Still Alive 3.3M VOTES RIP to our world's greatest achievers, those who changed the way we live and the ways we thought. This list of people we wis...
#19 of 241 People who voted for Mahatma Gandhi... People under 30 are 2x more likely to vote for this Women are 2x more likely to vote for this Freedom Fighters of India 378.5k VOTES "One individual may die for an idea; but that idea will, after his death, incarnate itself in a thousand lives. That is...
#21 of 469 Famous Role Models We'd Like to Meet In Person 537.9k VOTES These are the famous folks it would be most exciting to meet in person, as ranked by the wisdom of the crowd. Some of the be...
#13 of 148 The Very Best Oscar Winning Performances 50.7k VOTES Over the years, there have been so many great actors and actresses who have won Oscars for portraying classic characters. So...
#14 of 100 Historical Figures You Most Want to Bring Back from the Dead 143.9k VOTES Throughout the course of history, the human race has produced some truly remarkable individuals - individuals who, sadly, ha...
#38 of 87 People Who Made the World a Better Place 57.9k VOTES This is a list of famous people who helped heal the world. Some people have been acknowledged for their efforts with No...
#10 of 15 The 15 Most Famous Introverts In World History 2.3k VOTES The word "introvert" is a pretty loaded term, really. It's hard to define the exact qualities that make someone in...
#12 of 17 Some Of The Last Known Photos Taken Of 17 Legendary Historical Figures 47.3k VOTES Since the invention of photography, images of the famous and infamous have enchanted the viewing public. A visual memorial o...
#11 of 91 People who voted for Mahatma Gandhi... also upvote Richard Nixon on The Worst U.S. Presidents also upvote Abraham Lincoln on The Greatest U.S. Presidents of All Time The Most Enlightened Leaders in World History 43.7k VOTES Enlightened leadership takes on many forms. Sometimes, especially in the ancient world, it was the codifying of laws and pre...
Historical Figures Who Are Nothing Like The People They're Painted To Be 64.5k VIEWS Some historical figures seem larger than life, like Cleopatra, Gandhi, Marie Antoinette, and Mother Teresa. But sometim...
Famous Only Children 424.6k VIEWS Who are the most famous only children of all time? This is a comprehensive list of notable people with...
Here Are The Modern Descendants Of History's Most Famous Assassination Victims 9k VIEWS Relatives of famous historical figures have to deal with profound ancestral pressure and expectations, which is doubly true ...
Who Did These Eventually Famous Kids Grow Up To Be? 998.5k VIEWS When kids are young, they can be anything: astronauts, politicians, police officers, attorneys, the ice cream man (you know ...
Every Person Who Has Been Immortalized in a Google Doodle 57.2k VIEWS Who are the most influential people in history? Here's a good place to start. This is a list of every person who has ev...
30+ Famous People of Indian Descent 110.4k VIEWS This list of famous people of Indian descent is loosely ranked by fame and popularity. Many famous celebrities are of Indian...
Gallup Poll: Widely Admired People of the 20th Century 12.6k VIEWS Gallup every year polls US citizens asking which people they "most admire" – this list was compiled from the resul...

Mahatma Gandhi is also found on...