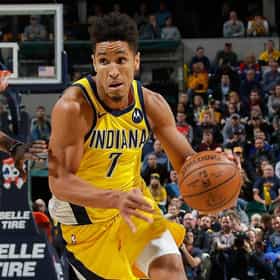 Malcolm Moses Adams Brogdon (born December 11, 1992) is an American professional basketball player for the Indiana Pacers of the National Basketball Association (NBA). He played college basketball for the Virginia Cavaliers under Tony Bennett. As a senior in 2015–16, he was a consensus first-team All-American. He was also named the Atlantic Coast Conference (ACC) Player of the Year and Defensive Player of the Year, becoming the first player in conference history to earn both honors in the same season. He was selected in the second round of the 2016 NBA draft by the Bucks with the 36th overall pick. He went on to win the NBA Rookie of the Year Award, becoming the first second-round pick ... more on Wikipedia

Malcolm Brogdon is ranked on...