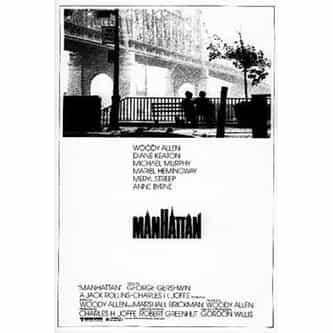 Manhattan is a 1979 American romantic comedy-drama film directed by Woody Allen and produced by Charles H. Joffe. The screenplay was written by Allen and Marshall Brickman. Allen co-stars as a twice-divorced 42-year-old comedy writer who dates a 17-year-old girl but falls in love with his best friend's mistress. Meryl Streep and Anne Byrne also star. Manhattan was filmed in black-and-white and 2.35:1 widescreen. The film also features music composed by George Gershwin, including Rhapsody ... more on Wikipedia

Manhattan IS LISTED ON