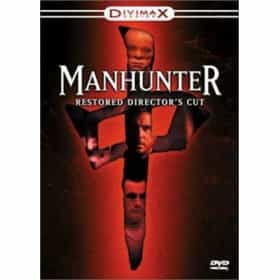 Manhunter is a 1986 American thriller film based on Thomas Harris' novel Red Dragon. Written and directed by Michael Mann, it stars William Petersen as Will Graham and features Brian Cox as Hannibal Lecktor. When asked to investigate a person known as "The Tooth Fairy", FBI profiler Will Graham comes out of retirement to lend his talents to the case, but in doing so he must confront the specter of his past and meet with a jailed person who nearly counted Graham amongst his victims. Dennis Farina co-stars as Jack Crawford, Graham's superior at the FBI Francis Dollarhyde—"The Tooth Fairy"—is portrayed by Tom Noonan. ... more on Wikipedia

Manhunter is ranked on...

Manhunter is also found on...