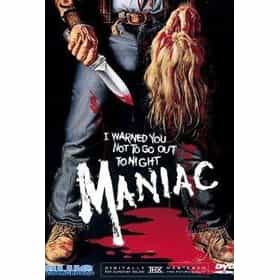 Maniac is a 1980 American exploitation slasher film directed by William Lustig and written by Joe Spinell and C. A. Rosenberg. The plot focuses on a disturbed and traumatized serial killer who scalps his victims. Spinell also developed the story and stars as the lead character. With a minuscule budget, many scenes in the film were shot guerrilla style. Originally considered an exploitation film, Maniac has since attained cult status. The Hollywood Reporter called it "something of a grubby touchstone among genre fans." The film was remade in 2012 by director Franck Khalfoun and produced by Alexandre Aja, starring Elijah Wood in the lead role. ... more on Wikipedia

Maniac is ranked on...

#454 of 571 The Greatest Movies Of The 1980s, Ranked 516.8k VOTES Since it was one of the greatest decades for film, here's a list of the best movies of the 80s. These are the most popu...
#404 of 799 The Best Horror Movies Of All Time 1M VOTES Horror movies, ranked by adrenaline junkies worldwide. Anyone can vote on this CrowdRanked list, and can even add your own f...
#10 of 13 The Best Horror Movie Synth Scores 385 VOTES Unlike many other genres of film, horror movie soundtracks play as important a role to the storytelling as the dialogue. The...
#104 of 161 The Best Horror Movies of 1980s 106.4k VOTES This list of the best 80s horror movies is a lengthy one, with good reason. The 1980s were a phenomenal decade for horror fi...
#28 of 84 The Best Slasher Movies of the 1980s 6.8k VOTES It's hard to argue that the 80s wasn't the pinnacle of the slasher genre. This best 1980s slasher movie list features severa...
#362 of 504 The Scariest Movies Ever Made 547.4k VOTES These are the all-time scariest movies ever made. Many of these movies have become part of the pop culture lexicon due to th...
#68 of 181 People who voted for Maniac... are 6x more likely to vote for The Burning on this list The Best Slasher Movies 90.7k VOTES A list of the best slasher movies. These are some of the best slasher films ever made, but if you feel we've missed one, ple...
#10 of 44 The Best Tom Savini Movies 243 VOTES List of the best Tom Savini movies, ranked best to worst with movie trailers when available. Tom Savini's highest grossing m...
#12 of 24 The Top 25 Must-See Quintessential Slasher Movies 532 VOTES If there's one thing that remains true about slasher films, it's that they come and go in clusters. If one becomes a mega-hi...

Maniac is also found on...