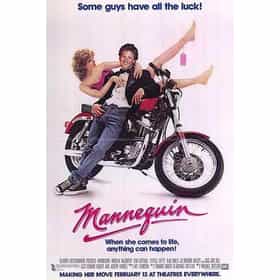 Mannequin is a 1987 romantic comedy fantasy film starring Andrew McCarthy, Kim Cattrall, Meshach Taylor, James Spader, G. W. Bailey, and Estelle Getty. Directed and written by Michael Gottlieb, the film was also co-written by Edward Rugoff. The original music score was composed by Sylvester Levay. The film tells about a chronically underemployed artist named Jonathan Switcher who gets a job as a department-store window dresser and falls in love with a mannequin —the attraction being that she comes to life on occasion, but only for him. Mannequin received a nomination for an Academy Award for Best Original Song for its main title tune, "Nothing's Gonna Stop Us Now" by ... more on Wikipedia

Mannequin is ranked on...

Mannequin is also found on...

Famous Movies Filmed in Philadelphia List of All Fantasy Movies Gay Movies: List of All Gay Films Movies Distributed by The Cannon Group