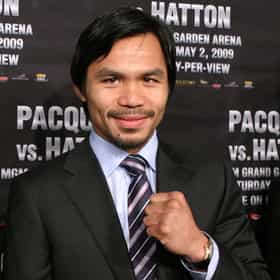 Emmanuel Dapidran Pacquiao, PLH ( PAK-ee-ow; Tagalog: [pɐkˈjaʊ]; born December 17, 1978) is a Filipino professional boxer and politician, currently serving as a senator of the Philippines. Pacquiao is regarded by many boxing historians as one of the greatest professional boxers of all time.He is the only eight-division world champion in the history of boxing, having won twelve major world titles, as well as being the first boxer to win the lineal championship in five different weight classes. Pacquiao is also the first boxer in history to win major world titles in four of the eight "glamour divisions" of boxing: flyweight, featherweight, lightweight and welterweight.He was ... more on Wikipedia

Manny Pacquiáo is ranked on...

Manny Pacquiáo is also found on...