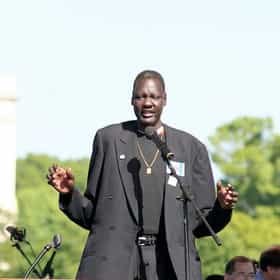 Manute Bol (; d. June 19, 2010) was a Sudanese-born American basketball player and political activist. Listed at 7 ft 7 in (2.31 m) tall, Bol was one of the three tallest players in the history of the National Basketball Association. After playing college basketball at the University of Bridgeport, Bol was chosen by the Washington Bullets in the 1985 NBA Draft. Bol played for the Bullets and three other teams over the course of his NBA career, which lasted from 1985 to 1995. A center, Bol was considered among the best shot-blockers in the history of the sport, but other aspects of his game were considered below average. Over the course of his career, Bol blocked more shots than he ... more on Wikipedia

Manute Bol is ranked on...

Manute Bol is also found on...