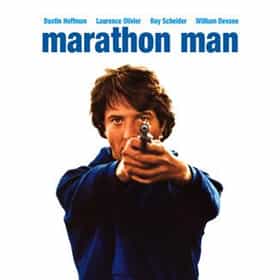 Marathon Man is a 1976 suspense/thriller film directed by John Schlesinger. It was adapted by William Goldman from his novel of the same name and stars Dustin Hoffman, Laurence Olivier, Roy Scheider, William Devane and Marthe Keller. The music score was composed by Michael Small. The film was a critical and box office success, with Olivier earning a Supporting Actor Academy Award nomination for his role as the film's antagonist. ... more on Wikipedia

Marathon Man is ranked on...

Marathon Man is also found on...