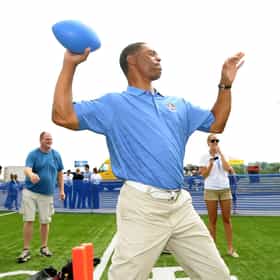 Marcus LeMarr Allen (born March 26, 1960) is an American former football running back and football analyst for CBS. As a professional, Allen ran for 12,243 yards and caught 587 passes for 5,412 yards during his career for both the Los Angeles Raiders and the Kansas City Chiefs from 1982 to 1997. He scored 145 touchdowns, including a then-league-record 123 rushing touchdowns, and was elected to six Pro Bowls over the course of his career. Allen was the first NFL player to gain more than 10,000 rushing yards and 5,000 receiving yards during his career. Allen is considered one of the greatest goal line and short-yard runners in National Football League (NFL) history.His younger brother, ... more on Wikipedia

Marcus Allen is ranked on...

Marcus Allen is also found on...