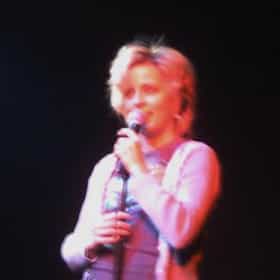 Maria Elizabeth Sheldon Bamford (born September 3, 1970) is an American stand-up comedian, actress, and voice actress. She is best known for her portrayal of her dysfunctional family and self-deprecating comedy involving jokes about depression and anxiety. Her first comedy album and tour was The Burning Bridges Tour (2003), followed by her second album, How to WIN! (2007), and her third, Unwanted Thoughts Syndrome (2009). She appeared in her first feature film, Lucky Numbers (2000), before lending her voice to characters on many different animated shows, including Shriek on CatDog, and many more characters on American Dad!, Ugly Americans, Adventure Time, and BoJack Horseman. Bamford's ... more on Wikipedia

Maria Bamford is ranked on...

#87 of 294 People who voted for Maria Bamford... also upvote Star Wars Franchise on The Most Rewatchable Movies also upvote Romero Zombie Delete on The Greatest Horror Films of All Time The Funniest Female Comedians of All Time 255.7k VOTES The funniest female comedians star on our favorite sitcoms, perform standup at the top comedy clubs and best of all, make us...
#11 of 11 Who Would Star In A Gender-Swapped ‘Reservoir Dogs’? 1.7k VOTES Reservoir Dogs, Quentin Tarantino's feature-length debut, was an instant classic upon its release. With a powerhouse cast fe...
#75 of 106 The Most Original Comedians 45k VOTES Picking the top original comedians may start a bar fight but it's time to weigh in. What is the criteria for choosing some o...
#17 of 32 The Best Female Stand Up Comedians of the 2010s 1.1k VOTES The best 2010s stand up comedians who just so happen to be born female are listed here awaiting your votes. The best female ...
#2 of 20 The Best Female Stand Up Comedians of the 2000s 693 VOTES Some of the best 2000s stand up comedians might include men like Louis C.K. or Dane Cook, it is also women like Tig Notaro...
#55 of 57 Who Was America's Crazy Aunt in 2015? 5.1k VOTES Everyone has a crazy aunt. That sister your mom rarely talks about, but who you think is the most fun person in the world. I...
Famous People Who Have Been Through Depression 114.4k VIEWS This is a list of famous people with depression, or who have suffered from depression at some point in their lives. Who are ...
#3 of 39 The Funniest Alternative Comedians of All Time 1.4k VOTES   This list contains information about the best alternative comedians, loosely ranked by user votes. The best alt com...
Famous People Named Maria 21k VIEWS List of famous people named Maria, along with photos. How many celebrities named Maria can you think of? The famous Marias...

Maria Bamford is also found on...