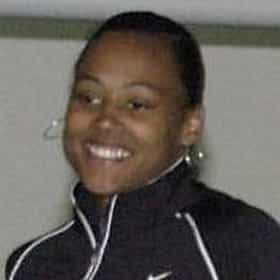 Marion Lois Jones (born October 12, 1975), also known as Marion Jones-Thompson, is an American former world champion track and field athlete and a former professional basketball player for Tulsa Shock in the WNBA. She won three gold medals and two bronze medals at the 2000 Summer Olympics in Sydney, Australia, but was later stripped of her medals after admitting to steroid use. Jones did retain her 3 titles as world champions from 1997–1999. At the time of her admission and subsequent guilty plea, Jones was one of the most famous athletes to be linked to the BALCO scandal. The case against BALCO covered more than 20 top level athletes, including Jones's ex-husband, shot putter C.J. ... more on Wikipedia

Marion Jones is ranked on...

#249 of 316 The Most Inspiring (Non-Hollywood) Female Role Models 84.5k VOTES Who run the world? Girls! After compiling this list, we're positive that ladies all over the planet are kicking ass and ta...
#38 of 54 Famous Athletes Who Could Have Dominated a Second Sport 14.9k VOTES Famous athletes who could have dominated a second sport tell the story of men and women with so much athletic ability that t...
#10 of 21 20 Videos of Pro Athletes Crying at Press Conferences 152 VOTES Athletes crying at press conferences show a softer, more human side of our favorite professional athletes. All of these prof...
Famous People Whose Last Name Is Jones 19.4k VIEWS Being a fairly common name, it's no surprise there are a lot of famous people with the last name Jones. Do you recognize all...
Famous People Named Marion 5.1k VIEWS Who knew there were so many famous people named Marion in the world? Our list of celebrities named Marion includes picture...
Celebrities Who Live in Austin 4.3k VIEWS This list includes information about celebrities who live in Austin, loosely ranked by popularity. Celebrities that live in ...

Marion Jones is also found on...