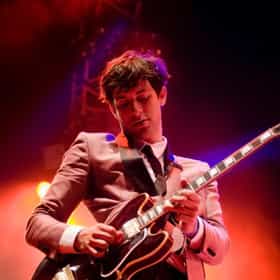 Mark Daniel Ronson (born 4 September 1975) is a British–American musician, DJ, songwriter and record producer. Ronson is best known for his collaborations with artists such as Amy Winehouse, Lady Gaga, Adele, Lily Allen, Miley Cyrus, Queens of the Stone Age, and Bruno Mars. He has received seven Grammy Awards, including Producer of the Year for Winehouse's album Back to Black and two for Record of the Year singles "Rehab" and "Uptown Funk". He received an Academy Award, a Golden Globe Award and a Grammy Award for co-writing the song "Shallow" for the film A Star is Born (2018). Ronson was born in London and raised in New York City. His stepfather is ... more on Wikipedia

Mark Ronson is ranked on...

#7 of 139 The Best Musical Guests on 'The Tonight Show Starring Jimmy Fallon' in 2019 1.2k VOTES Update - Check out the musical guests on Fallon in 2020! This list contains all the 2019 musical guests on Jimmy Fallon. R...
#52 of 110 The Greatest Musical Artists Of The 2010s 11.3k VOTES From Kanye West and Taylor Swift to Bruno Mars and Janelle Monáe, we're ranking the best artists of the decade. ...
Famous People Named Mark 47.9k VIEWS List of famous people named Mark, along with photos. How many celebrities named Mark can you think of? The famous Marks belo...
Every Band & Musician Who Has Performed on Saturday Night Live 106.3k VIEWS Live from the main stage at 30 Rockefeller Plaza, this is a list of every band, musician, and singer who has performed on Sa...
Celebrities Who Have Presented TED Talks 229k VIEWS This list contains information about celebrities and famous people who have done TED Talks, loosely ranked by fame and popul...
20 Rock Stars Who Married Supermodels 181.3k VIEWS This list of rock stars who married supermodels is loosely ranked by fame and popularity. The primary motivation for many yo...
Celebrities Turning 40 in 2015 305.4k VIEWS It’s official: 40 is the new 20. Or at least the new 30. If this list of celebrities turning 40 in 2015 proves anything, it’...

Mark Ronson is also found on...