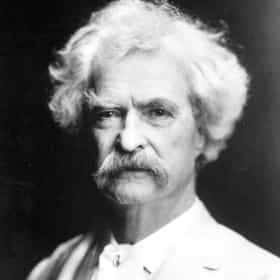 Samuel Langhorne Clemens (November 30, 1835 – April 21, 1910), known by his pen name Mark Twain, was an American writer, humorist, entrepreneur, publisher, and lecturer. He was lauded as the "greatest humorist this country has produced", and William Faulkner called him "the father of American literature". His novels include The Adventures of Tom Sawyer (1876) and its sequel, the Adventures of Huckleberry Finn (1885), the latter often called "The Great American Novel". Twain was raised in Hannibal, Missouri, which later provided the setting for Tom Sawyer and Huckleberry Finn. He served an apprenticeship with a printer and then worked as a typesetter, ... more on Wikipedia

Mark Twain Was Somehow Even More Interesting Than You Thought 26.2k views Samuel Clemens (the real name of author Mark Twain), is one of the most well-loved writers of all time, certainly up there w...
The Best Mark Twain Quotes 5.2k votes A list of the best Mark Twain quotes. List is arranged by which ones are the most famous Mark Twain quotes and which have pr...
Mark Twain Had A Seeming Obsession With Young Girls That Would Land A Modern Figure In Hot Water 184.8k views Samuel Langhorne Clemens, who went by the pen name Mark Twain, was a renowned American writer and humorist. His literary cla...
The Best Mark Twain Books 218 votes List of the best Mark Twain books, ranked by voracious readers in the Ranker community. With commercial success and critical...

Mark Twain is ranked on...

Mark Twain is also found on...