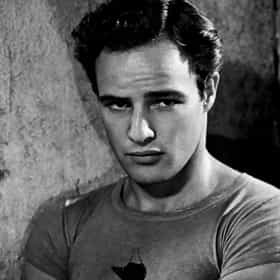 Marlon Brando Jr. (April 3, 1924 – July 1, 2004) was an American actor and film director. With a career spanning 60 years, he is well-regarded for his cultural influence on 20th-century film. Brando's Academy Award-winning performances include that of Terry Malloy in On the Waterfront (1954) and Don Vito Corleone in The Godfather (1972). Brando was an activist for many causes, notably the civil rights movement and various Native American movements. He is credited with helping to popularize the Stanislavski system of acting, having studied with Stella Adler in the 1940s. He is often regarded as one of the first actors to bring Method Acting (built from the Stanislavski system) to ... more on Wikipedia

Brigitte Bardot
15 Insane Facts About Marlon Brando, One Of The Weirdest Actors Ever 69.3k views In addition to being one of cinema's all-time greatest actors, Marlon Brando ranks as one of Hollywood's all-time great weir...
17 Things You Didn't Know About Marlon Brando 886 votes Who was Marlon Brando? One of the most celebrated film actors of all time, known for his great on-screen presence and quiet ...
Behind-The-Scenes Stories About Marlon Brando In 'Apocalypse Now' 4.1k views Though it's widely considered one of the greatest American movies ever made, Apocalypse Now is perhaps best-known for its tu...
Every Marlon Brando Movie, Ranked Best to Worst 5.6k votes The best Marlon Brando movies of all time prove that he was one of the top actors of all time. Active from the ‘40s up until...
This May Have Been The Strangest Road Trip Ever – If It Indeed Happened Like They Say It Did 2.5k views On September 11, 2001, terrorists attacked the World Trade Center, thousands of people lost their lives, and three of the wo...

Marlon Brando is ranked on...

Marlon Brando is also found on...