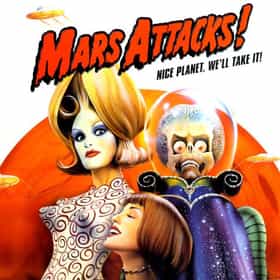 ‘Mars Attacks!’ Was Tim Burton’s Ultimate Unregulated Experiment And It’s Stranger Than You Remember 31k views By the time Mars Attacks! came out, Tim Burton had gone from being a solid albeit oddball director to a money-printing machi...
The Funniest Quotes From Tim Burton's 'Mars Attacks!' 129 votes There are plenty of hilarious quotes from Mars Attacks! No matter if you are preparing for a '90s trivia night or just want ...

Mars Attacks! is ranked on...

Mars Attacks! is also found on...

List of All Parody Movies List of All Fantasy Movies Famous Movies Filmed in Washington, D.C. Films Scored By Danny Elfman List of All Movies Released in 1996