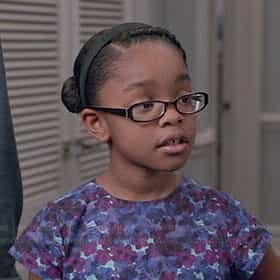 Marsai Martin (born August 14, 2004) is an American actress, singer, and producer. She is known for her role as Diane Johnson in the ABC comedy series Black-ish. She is set to star and executive produce the 2019 Universal Pictures comedy film Little. Martin was born in Plano, Texas. At age five, she landed her first national commercial, before moving to Los Angeles in 2013.[The following year, Martin was cast opposite Anthony Anderson and Tracee Ellis Ross in the ABC comedy series Black-ish created by Kenya Barris. In 2016, Martin made her film debut playing a leading role in the Amazon Studios original film An American Girl Story – Melody 1963: Love Has to Win set in Detroit during ... more on Wikipedia

Marsai Martin is ranked on...

#24 of 27 Who Would Star In An Americanized 'Harry Potter'? 305.8k VOTES When word came that the Harry Potter books would be turned into a series of films, everyone cheered "Hooray for Ho...
#10 of 15 The 15 Best Breakout Acting Performances Of 2019 4.7k VOTES The 2019 E! People’s Choice Awards honors our favorite movies and major stars of the year, but what about the breakout ...
#20 of 68 Celebrating The Best Young Actors Of The 2010s 1.3k VOTES Some of them may not be old enough to drink - or even drive - but the top young actors of the 2010s have managed to accompli...
#15 of 56 The Best Black Actors & Actresses Under 40 6.2k VOTES It can be difficult to build a notable career as a young celebrity, especially if you're a Black actor or actress. We've put...
#16 of 30 Coolest Teen Actors and Musicians Of 2019 11.3k VOTES Who will be the next Timothée Chalamet, Chance the Rapper, or Lorde? These teen stars need to be on your radar. They ...
#28 of 53 The 50+ Best Young Actresses Under 25 4.2k VOTES Who are the young actresses that will take the places of stars like Miley Cyrus and Selena Gomez, who have since graduated f...
#5 of 36 The Best Black Actresses Under 25 1.3k VOTES When it comes to amazing young black actresses, Hollywood is full of rising stars. From black actresses in their 20s and tee...