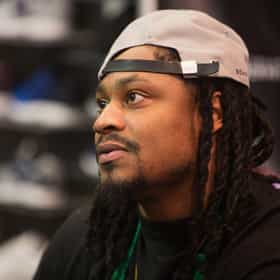 Marshawn Terrell Lynch (born April 22, 1986) is a former American football running back. He was drafted by the Buffalo Bills in the first round of the 2007 NFL Draft after playing college football at the University of California, Berkeley, where he became the school's second all-time career rusher.After three seasons with the Bills, Lynch was traded to the Seattle Seahawks mid-way through the 2010 season. With Seattle, he made four Pro Bowls and won Super Bowl XLVIII against the Denver Broncos. After initially retiring after the 2015 season, Lynch applied for reinstatement and was traded to the Oakland Raiders in April 2017, with whom he played two seasons before retiring again. Lynch ... more on Wikipedia

Marshawn Lynch is ranked on...

Marshawn Lynch is also found on...