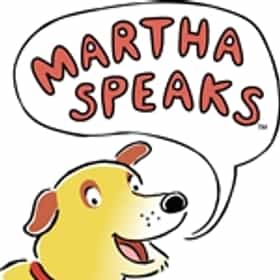 Martha Speaks is a American-Canadian animated children's television series based on the 1992 children's book of the same name by Susan Meddaugh, about a talking dog named Martha, who is owned by ten-year-old Helen Lorraine. When Helen feeds Martha some alphabet soup, the soup travels to her brain instead of her stomach, resulting in her ability to speak. The show focuses on synonyms and vocabulary, with each episode featuring an underlying theme illustrated with key words. The show takes place in the fictional town of Wagstaff City, a parody of Flagstaff, Arizona. The show is produced by WGBH in Boston, along with Vancouver based animation studio DHX Media Vancouver, and debuted on ... more on Wikipedia

Martha Speaks is ranked on...

#186 of 383 The Best Kids Cartoons of All Time 1.2M VOTES This list contains information about the best kids cartoons, ranked by your votes. Over the years, there have been tons of g...
#21 of 51 The Best PBS Cartoons of All Time 41.3k VOTES This list contains information about the best PBS cartoons, ranked by your votes. Over the years, PBS has aired a variety of...
#87 of 146 The Most Annoying Kids Shows of All Time 80.2k VOTES There's something about TV shows made for children that can really put the rest of the world on edge. The loudness, the obno...
#196 of 238 The Greatest Cartoon Theme Songs of All Time 160.6k VOTES For entire generations of kids, some of their most fond memories are of watching Saturday morning cartoons. The animated sho...
#17 of 78 People who voted for Martha Speaks... are 5x more likely to vote for Arthur on this list are 12x more likely to vote for Curious George on this list The Best PBS Kids TV Shows Ever, Ranked 106.4k VOTES If you were a kid in the 90s or 2000s, you probably have seen several of the best PBS kids TV shows. Many of those PBS kids ...
#35 of 374 The Best Children's TV Shows 46.1k VOTES Here you have it, folks: a list of the very best kids' shows on television, ranked from best to worst, as voted on by people...
#12 of 45 The Best Discovery Kids TV Shows of All Time 8.1k VOTES List of popular Discovery Family channel shows, ranked from best to worst. This list of the top current and cancelled Discov...
#20 of 63 The Best Family Shows on Amazon Prime 1.3k VOTES There's nothing like sitting back on a night in with your family, and what better way to spend such a night than watching sh...
#23 of 52 The Best Animated Shows On Amazon Prime 1.1k VOTES From kids to adults, everyone can enjoy a nice animated TV show, and there's plenty available on Amazon Prime. From stop-mot...
#16 of 42 The Best Dog Cartoons 437 VOTES Since the beginning of animation, the best cartoons have been filled with animals rather than humans. It's no wonder that do...
#7 of 18 The Best Reading Shows For Kids 225 VOTES Aside from being a great place to waste a whole day by binge-watching a series that features teenagers in a post-apocal...
#18 of 35 Good TV Shows for Babies 1.2k VOTES Although many parents limit screen time for children under a certain age, many also choose fun and educational shows for the...
#15 of 27 Good Educational Shows for Toddlers 221 VOTES Whether or not toddlers are given a limit on screentime, many parents primarily choose educational shows for toddlers as wha...