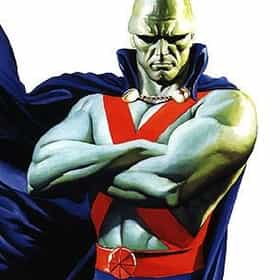 The Martian Manhunter is a fictional superhero who appears in comic books published by DC Comics. Created by writer Joseph Samachson and artist Joe Certa, the character first appeared in Detective Comics #225 "The Manhunter From Mars" in November 1955. He is known for being one of the core members of the Justice League of America. J'onn J'onzz has featured in other DC Comics-endorsed products, such as video games, television series, animated films, or merchandise like action figures and trading cards. He was ranked #43 on IGN's greatest comic book hero list. ... more on Wikipedia

Martian Manhunter is ranked on...

#277 of 309 The Greatest Cartoon Characters in TV History 834.1k VOTES Throughout the annals of TV history, cartoon stars have shone brightly, bringing joy to children and adults alike....
#9 of 188 People who voted for Martian Manhunter... also upvote Green Lantern on The Best Comic Book Superheroes of All Time The 100+ Best DC Comics Heroes of All Time, According to Fans 516.9k VOTES DC Comics has a stable of great, iconic heroes on their roster, and while fans of Marvel would vehemently disagree – some of...
#6 of 92 People who voted for Martian Manhunter... also upvote Superman Franchise on The Best Superhero Movies Ever Made also upvote Vision on The Greatest Marvel Avengers Characters of All Time The Best Members of the Justice League and JLA 122.4k VOTES Many heroes have been a part of DC's most famous superhero team since its inception in the 60s, but who are the best members...
#7 of 102 Comic Book Characters We Want to See on Film 133.5k VOTES   Certain comic book characters definitely lend themselves to film better than others. Sometimes it's their costume...
#12 of 21 The Best Zombie Versions Of Superheroes 2.9k VOTES Marvel and DC have been publishing comic books for over 80 years, and throughout that time, different versions of the publis...
#24 of 24 People who voted for Martian Manhunter... People in the Midwest are 2x more likely to vote for this The Hottest Male Comic Book Characters 60.4k VOTES The hottest comic book men, as voted on by comic lovers around the world. From superheroes to supervillains, these are the s...
#23 of 50 The Greatest TV Aliens Living Among Earthlings 15.6k VOTES List of the best aliens that have ever graced the television screen. Sometimes it starts with something as simple as a shoot...
#30 of 162 The Most Powerful Comic Book Characters Ever, Ranked 132.4k VOTES The problem with ranking the most powerful characters in the history of comic books is that writers always want to top the t...
#8 of 15 Comic Book Characters Who Would Definitely Vote Democrat 546 VOTES If you're looking to start a fight in your local comic book store, walk in and declare that a popular comic book character i...
#6 of 25 Comic Book Characters That Need Their Own Movie 6.3k VOTES While both Warner Bros. and Disney are in a hurry to bring all of the major DC and Marvel superheroes to the big screen, the...
#5 of 14 Which Hogwarts House Would Each Justice League Member Be Sorted Into? 864 VOTES Children with vivid imaginations often fantasize about achieving extraordinary and fantastic milestones, like bein...
#16 of 23 The Most Overpowered Superheroes 2.7k VOTES There are a lot of superheroes who are strong, but what about the ones who are too strong? When you think about it, someone ...
All DC Villains & DC Comics Enemies 402.1k VIEWS DC villains list is a huge list of all the villains from DC Comics. Supervillains make life miserable for the heroes and m...
#6 of 17 The Best Characters On 'Supergirl' 5.5k VOTES The best Supergirl characters include both heroes and villains. Some, like Martian Manhunter, are easily recognizable, while...
#15 of 20 The Most Emo Marvel And DC Superheroes 929 VOTES Get ready to weep as we rank the saddest and most moody Marvel and DC superheroes of all time. Many of the superheroes ...
#10 of 15 The 15 Best Superheroes With Enhanced Senses 310 VOTES Superheroes with enhanced senses have abilities that far exceed the senses of any normal man or woman. While some heroes enj...
#13 of 20 The 20 Most Powerful Telepaths, Ranked 1.3k VOTES Not to be confused with telekinesis, superheroes with the power of telepathy are able to read people’s minds and, in some ca...
Which Justice League Member Are You Based On Your Zodiac? 126.3k VIEWS DC Comics fans all have their faves when it comes to the League's members - each superhero has powers and traits that may re...
#4 of 18 The Best Shapeshifting Superheroes 344 VOTES Superheroes who can shapeshift come in many forms (literally). From changing into other life forms to resembling inanimate o...
#13 of 20 The Best Superheroes Who Can Fly 2.2k VOTES Get ready to take flight as we rank all your favorite flying superheroes. When it comes to ranking the best superpowers, bei...
#3 of 20 The Best Outsiders Members 77 VOTES While basically everybody is familiar with which heroes were members of the Justice League, not being quite as familiar...

Martian Manhunter is also found on...