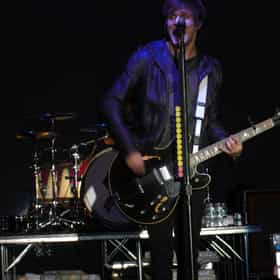 Martin Bennett Johnson is an American singer-songwriter and record producer. In addition to being a songwriter and producer, he is the frontman of the pop rock band Boys Like Girls. He has written and produced for various artists, including Taylor Swift, Avril Lavigne, Daughtry, Jason Derulo, Christina Perri, Gavin Degraw, Hot Chelle Rae, and many more. Johnson is credited with having several RIAA-certified multi-platinum songs. Songs he has written have sold over 10 million copies and he has had 9 Top 40 charting singles. ... more on Wikipedia

Martin Johnson is ranked on...

Famous People Named Martin 26.5k VIEWS List of famous people named Martin, along with photos. How many celebrities named Martin can you think of? The famous Martin...
Ashley Tisdale Loves and Hookups 3.2k VIEWS Who is Ashley Tisdale dating? Many famous men have dated High School Musical star Ashley Tisdale, and this list will give yo...

Martin Johnson is also found on...