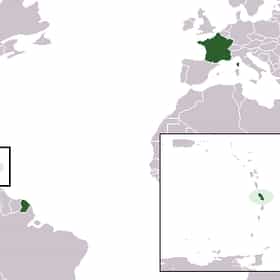 Martinique is an island in the Lesser Antilles in the eastern Caribbean Sea, with a land area of 1,128 square kilometres and a population of 386,486 inhabitants. Like Guadeloupe, it is an overseas region of France, consisting of a single overseas department. One of the Windward Islands, it is directly north of Saint Lucia, northwest of Barbados, and south of Dominica. As with the other overseas departments, Martinique is one of the twenty-seven regions of France and an integral part of the French Republic. As part of France, Martinique is part of the European Union, and its currency is the euro. The official language is French, and virtually the entire population also speak Antillean ... more on Wikipedia

Martinique is ranked on...

#44 of 87 The Best Honeymoon Destinations 30.3k VOTES This is a list, created by the community, of the best places to go on that one, special trip that most of us won't get the c...
#24 of 54 The Best Cruise Destinations 3.8k VOTES What are the best cruise destinations? Whether you're thinking warm, tropical and relaxing or hustling, bustling, historical...
#32 of 72 Best Couples Vacation Destinations & Anniversary Trips 4.1k VOTES If you’re trying to figure out what’s the best vacation spot for a young couple such as you and your better half, why not se...
#13 of 89 The Best Destinations for a Beach Wedding 5.1k VOTES List of the top destinations for a beach wedding. What are the best places for a beach wedding? This list ranks the most pop...

Martinique is also found on...