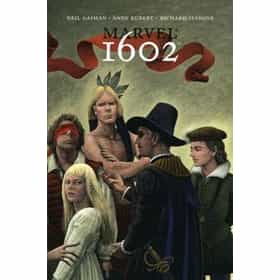 Marvel 1602 is a limited series eight-issue comic book published in 2003 by Marvel Comics. The limited series was written by Neil Gaiman, penciled by Andy Kubert, and digitally painted by Richard Isanove; Scott McKowen illustrated the distinctive scratchboard covers. The eight-part series takes place in a timeline where Marvel superheroes exist in the Elizabethan era; faced with the destruction of their world by a mysterious force, the heroes must fight to save their universe. Many of the early Marvel superheroes  Nick Fury, the X-Men, the Fantastic Four, and Spider-Man  as well as villains such as Doctor Doom and Magneto appear in various roles. ... more on Wikipedia