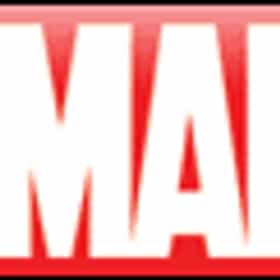 Marvel Entertainment, Inc. (NYSE:MVL) is an American entertainment company. The company traces its origins to the May 1933 publication of Western Supernovel Magazine. That magazine was only published for one issue before the title was changed to Complete Western Book Magazine in July 1933. The company's oldest character is Ka-Zar introduced in 1936. In 1939 the company began publishing comic books with Marvel Comics #1. With a library of over 5,000 characters, Marvel Entertainment, Inc. is one of the world's most prominent character-based entertainment companies. Marvel's operations are focused on utilizing its character franchises in licensing, entertainment, publishing and toys. ... more on Wikipedia

Marvel Entertainment is ranked on...

#91 of 170 The Best Logos in the World 105.2k VOTES The best logos in the world rank among some of the most iconic images, so it's no wonder they've found their way to a list o...
#47 of 111 Brands that Remind You of Childhood 111.2k VOTES Which brands remind you the most of your childhood? Your mom may think you're too old to have Nerf gun fights, or spend all ...
#15 of 16 The Biggest Corporate Social Media Fails And Disasters Of 2017 1.4k VOTES People get fired for saying stupid things on social media all the time. And while you can't fire a corporation, they al...
#24 of 180 People who voted for Marvel Entertainment... also upvote LEGO on Brands that Remind You of Childhood also upvote Alien Franchise on The Greatest Sci-Fi Movies of All Time Companies That Have The Best Branding 29.2k VOTES This is a list of the savviest brand managers in the business, ranked by the wisdom of the crowd. Anyone can contribute to t...
The 100 Fastest Growing Companies 34.2k VIEWS We present a list of the 100 fastest growing companies in the last year. The quickly expanding companies have up to triple d...

Marvel Entertainment is also found on...