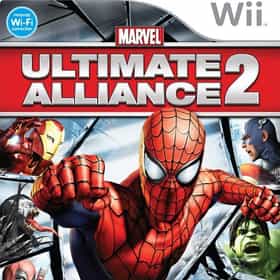 Marvel: Ultimate Alliance 2 is a 2009 action role-playing video game, the sequel to Marvel: Ultimate Alliance. The game was jointly developed by Vicarious Visions (PlayStation 3 and Xbox 360), n-Space (Nintendo DS, PlayStation 2 and Nintendo Wii) and Savage Entertainment (PlayStation Portable), and is published by Activision. The game features characters from the Marvel Comics universe and follows elements of the Secret War and Civil War story arcs. It was later released on July 26, 2016 for PlayStation 4 and Microsoft Windows, and on July 28, 2016 on Xbox One by Zoë Mode. ... more on Wikipedia

Marvel: Ultimate Alliance 2 is ranked on...

#37 of 119 The Best Video Game Sequels 6.1k VOTES Video games have gone from something you did with buddies at the local arcade to a multi-billion dollar industry that spends...
#24 of 54 The Best Thor Versions Of All Time 2.1k VOTES List of all the best interpretations of Thor throughout comics, movies, TV, and more. Thor is one of the more iconic superhe...
#26 of 54 The Best Versions of X-Men 3.4k VOTES The X-Men are easily one of the most iconic and recognizable superhero teams in the world. There are dozens of formats the c...
#4 of 52 The Best Black Panther Versions Of All Time 1.1k VOTES The Black Panther is officially the first black superhero in mainstream American comics (beating out Falcon, Storm, Luke Cag...
#26 of 51 The Greatest Versions of Venom, Ranked 6.2k VOTES Venom is arguably one the best villains in all of Marvel Comics. He's certainly one of Spider-Man's greatest foes. There are...
#5 of 45 The Best Fantastic Four Versions Of All Time 525 VOTES The Fantastic Four is easily one of the more iconic superhero teams in the world. Created by the comic legends Stan Lee and ...
#63 of 101 The Best Iron Man Versions Of All Time 1.5k VOTES Iron Man is one of the most iconic superheroes in the history of comics, especially after Robert Downey, Jr.'s film adaptati...
#45 of 57 The Best Avengers Versions Of All Time 1.7k VOTES The Avengers are comprised of the most recognizable superheroes on the planet. Each and every hero in the main team is almos...
#185 of 546 The Best XBox 360 Games of All Time, Ranked 34.6k VOTES The Xbox 360 is one of the most popular consoles of all time, so it’s only natural that fans like you want to know what are ...
#4 of 120 The Best Marvel Games Ever, Ranked 8.5k VOTES If you're a fan of the comic books or the MCU, then you'll enjoy the best Marvel video games ever made. Featuring classic&nb...
#4 of 16 The Best Xbox One Superhero Games 399 VOTES When it comes to good superhero games for Xbox One, there is a pretty good amount of variety. For that reason, we're ranking...
#14 of 22 The Most Popular Superhero Video Games Right Now 397 VOTES For those who love comic books and the caped crusaders within, we're ranking the most popular superhero games&nbsp...