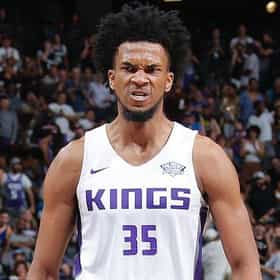 Marvin Bagley III (born March 14, 1999) is an American professional basketball player for the Sacramento Kings of the National Basketball Association (NBA). He played college basketball for the Duke Blue Devils and was a 2018 Consensus All-American. He was selected with the second overall pick by the Kings in the 2018 NBA draft. Before beginning what would be considered his senior year of high school, Bagley would game the system and reclassify himself into the Class of 2017 instead, thus allowing him to enter the 2018 NBA draft as an early entry in the collegiate level. On August 14, 2017, he announced that he successfully reclassified himself as a graduate from Sierra Canyon and is ... more on Wikipedia

Marvin Bagley III is ranked on...

#502 of 878 The Top NBA Players Of All Time 2M VOTES When it comes to the top NBA players of all time, there's plenty of speculation and room for debate, though many may not thi...
#26 of 71 The Best Sleeper Picks For Your Fantasy Basketball Team In 2019-2020 2.9k VOTES The best fantasy basketball sleepers can be the picks in any draft that could make or break your season. Everyone wants to t...
#133 of 320 The Top 100+ NBA Players Today 1.4M VOTES This list of the best basketball players in the NBA today ranks all of the league's current standout top players and NBA sta...
#135 of 175 The Greatest Power Forwards in NBA History 86.2k VOTES The greatest power forwards in NBA history are listed here on this list of the best power forwards of all time, ranked by lo...
#3 of 50 Who Will Be The 2019 NBA Rookie of the Year? 59.1k VOTES UPDATE: Head over and check out the 2020 NBA Rookie of the Year predictions. The Dallas Mavericks' Luka Dončić was na...
#3 of 36 2018 NBA Draft: Predicting The Number 1 Pick 2.4k VOTES Featuring some of the best college basketball players right now, these are the top prospects for the 2018 NBA Draft. Un...
#48 of 88 The Best Sacramento Kings of All Time 13.4k VOTES A list of the best Sacramento Kings of all time. The Sacramento Kings have moved cities more than any other team in NBA hist...
Every Player Injured During The 2019-20 NBA Season (So Far) 2.2k VIEWS A new basketball season unfortunately often means a new spate of injuries, and the worst NBA injuries of 2019 are proof that...
#7 of 29 The Best Current NBA Left-Handed Players 21.9k VOTES Who are the best left-handed players currently in the NBA? Certainly, this list includes some of the best lefties playing&nb...
#26 of 46 Who Will Win The 2020 NBA Most Improved Player Award? 17.4k VOTES Every 2020 NBA Most Improved Player Award candidate is hoping to take a significant step forward in his career. The list of ...