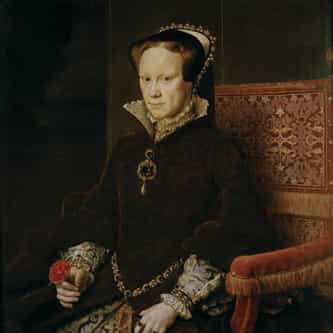 Mary I of England

Mary I (18 February 1516 – 17 November 1558), also known as Mary Tudor, was the Queen of England and Ireland from July 1553 until her death. She is best known for her aggressive attempt to reverse the English Reformation, which had begun during the reign of her father, Henry VIII. The executions that marked her pursuit of the restoration of Roman Catholicism in England and Ireland led to her denunciation as "Bloody Mary" by her Protestant opponents. Mary was the only child of ... more on Wikipedia

lists about Mary I of England

Mary I of England IS LISTED ON

#747 of 2,443
2.2M VOTES The Most Influential People of All Time
#4 of 14
22.3k VOTES The Most Ruthless Queens And Female Rulers Of All Time
#18 of 266
207.6k VOTES The Most Powerful Women Of All Time
#19 of 22
21k VOTES This Artist Creates Vivid Reimaginings Of Historical Figures In Modern Styles
532.4k VIEWS The Signature Afflictions Suffered By Some Of History's Most Famous Royals
64.4k VIEWS 13 Famous Historical Women Who Married Guys Way Younger Than Them
5.5k VIEWS Which Bloodthirsty Conquerer Were You In Your Past Life Based On Your Zodiac Sign
28.4k VIEWS Which Famous Queen From History Matches Your Zodiac Sign?
Famous People Buried in London Members of the Tudor Dynasty Famous People Who Died in London Famous People Buried in United Kingdom Famous People Who Died in England