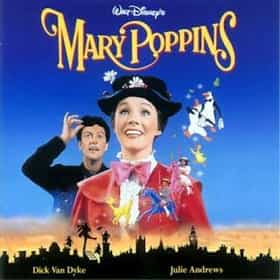 Mary Poppins is a 1964 American musical fantasy film directed by Robert Stevenson and produced by Walt Disney, with songs written and composed by the Sherman Brothers. The screenplay is by Bill Walsh and Don DaGradi, loosely based on P. L. Travers' book series of the same name. The film, which combines live-action and animation, stars Julie Andrews in the titular role of a magical nanny who visits a dysfunctional family in London and employs her unique brand of lifestyle to improve the family's dynamic. Dick Van Dyke, David Tomlinson, and Glynis Johns are featured in supporting roles. The film was shot entirely at the Walt Disney Studios in Burbank, California. Mary Poppins was ... more on Wikipedia

Behind The Scenes, The Making Of 'Mary Poppins' Was Not As Magical As You'd Think 49.6k views For more than 50 years, generations of Disney movie lovers have grown up with flying nannies and one ridiculously long word,...
Every Song in Mary Poppins, Ranked by Singability 1.1k votes Chim chim cher-ee, we’re ranking the best songs from Disney's Mary Poppins. With music and lyrics by the Sherman Brothers, t...
All The Actors In 'Mary Poppins' Vs. Their Counterparts In 'Mary Poppins Returns' 1k votes Set decades after the original classic film, Mary Poppins Returns stars Emily Blunt as the titular nanny, who returns to Lon...

Mary Poppins is ranked on...

Mary Poppins is also found on...