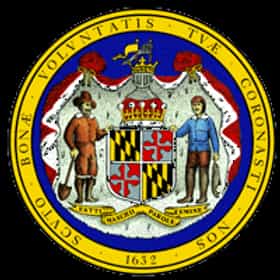 Maryland is a state located in the Mid-Atlantic region of the United States, bordering Virginia, West Virginia, and Washington, D.C. to its south and west; Pennsylvania to its north; and Delaware to its east. Maryland was the seventh state to ratify the United States Constitution, and has three occasionally used nicknames: the Old Line State, the Free State, and the Chesapeake Bay State. Maryland is also considered to be the birthplace of religious freedom in America, dating back to its earliest colonial days when it was made a refuge for persecuted Catholics from England by George Calvert the first Lord Baltimore, and the first English proprietor of the then-Maryland colonial grant. ... more on Wikipedia

Maryland is ranked on...

#10 of 51 The Worst Places to Live in The U.S. 32.1k VOTES Let's face it: some places are less desirable to live than others, especially in the United States. With a lot of people mig...
#30 of 52 People who voted for Maryland... also upvote Resident Evil Franchise on The Best Zombie Movies of All Time also upvote Lord of the Rings Franchise on The Most Rewatchable Movies The Best U.S. States For Vacations 19.8k VOTES This is a list of the best US States to plan a trip to, ranked by people who love to explore the vast variety of attractions...
#33 of 50 The Best State Nicknames 8.5k VOTES Did you know that every state* in the United States of America has an official state nickname? No, it's not just because the...
#12 of 16 People who voted for Maryland... People in the Northeast are 3x more likely to vote for this The Best Southern States To Live In 9.1k VOTES The South is known for its gorgeous landscapes, its delicious foods, and its fun in the sun. Some of the best places to live...
#3 of 50 People Are Naming The Meal That Best Represents Their State And The Answers Are Surprising 19.1k VOTES Food can tell a story and, for residents of each US state, food is part of their identity. The meals that represent states l...
#21 of 50 Each State's Signature Alcohol 1.5k VOTES Recent trends in alcohol have shifted toward IPAs, craft beers, and microbreweries, giving us a whole world of new choi...
#31 of 34 The Best U.S. States for Camping 2.1k VOTES This is a ranked list of the best U.S. States for camping as voted on by men and women. These places include some of the mos...
In Which State Are You Most Likely to Be Abducted by an Alien? 97.6k VIEWS Whether you’re a true believer or not, you’ve probably thought about being abducted by an alien at least once or twice. But ...
How Much Your Rent Would Cost In 1970 In Every US State 4.3k VIEWS Basic living expenses - housing, transportation, clothing, healthcare, food - vary significantly by location. Take Los ...
The Best State Songs 10.1k VIEWS A list of the best state songs. Ever wonder why you hear a particular song associated with a random state? Well, the odds ar...
We Know Where You Want to Travel This Summer, Based on What State You Live In 3.9k VIEWS Before you plan your next summer trip, let Ranker help you make your decision. Thanks to audience participation on votable l...
All the US States Where Gay Marriage Is Legal 106.2k VIEWS On June 26, 2015, a US Supreme Court decision ended restrictions on same-sex marriage in the United States. Prio...
Every State's Favorite Bad Movie 3.4k VIEWS Citizens of each state often share similar interests in eateries, activities, and even favorite alcohols. Now, you can feel ...

Maryland is also found on...