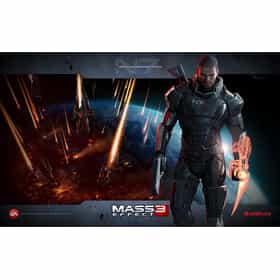 Mass Effect 3 is a 2012 science fiction action role-playing third person shooter video game developed by BioWare and published by Electronic Arts for Microsoft Windows, Xbox 360, PlayStation 3, and Wii U. Officially announced on December 11, 2010, the game was released March 6, 2012 and marks the final chapter in the Mass Effect trilogy of video games, completing the story of Commander Shepard. A Wii U version was announced during Nintendo's conference at E3 2012. The Wii U port was developed by Australian developer Straight Right, and was released as a Wii U launch game under the title Mass Effect 3: Special Edition. The combat system in Mass Effect 3 has been changed and refined. In ... more on Wikipedia

#151 of 523 The Most Addictive Video Games of All Time 374.4k VOTES The most addictive games of all time, ranked by the wisdom of the crowd. Anyone can add their video game addictions to this ...
#24 of 406 The Greatest RPG Video Games Ever Made 802k VOTES This list shows the ranking of the best pure Role-Playing Games, Action-RPG hybrids and MMORPG's of all time, as voted on by...
#6 of 16 The Most Frustrating Parts Of Great Video Games 906 VOTES Frustrating video game moments can tarnish even the best entries. The original Halo is hailed as a masterpiece, bu...
#5 of 15 The Biggest Video Game Blunders Of The 2010s 462 VOTES The last decade saw huge innovations sweep the gaming world, from the refinement of VR to the pioneering of cloud gamin...
#3 of 18 18 Super Messed Up Decisions Video Games Have Forced You To Make 33.4k VOTES Moral choices in video games are all the rage these days. There used to be a time when nobody gave a rat's patoot&...
#13 of 15 Most Controversial Video Games That Have Ever Been Released 5.8k VOTES Just like every other form of entertainment, video games have not been immune from stirring up media storms. Ever since the ...
#9 of 60 The Best Xbox One RPGs Released So Far 5.8k VOTES So you've just bought an Xbox One, and are looking to satiate your appetite for role-playing games. Microsoft has never been...
#14 of 45 The Best Wii U RPGs You Should Be Playing 1.4k VOTES Nintendo has always been known for producing some great role-playing games, and the Wii U RPGs on this list certainly back t...
#16 of 21 The Top Video Games That Couldn't Live Up to Their Hype 11.1k VOTES Video games belong to a mammoth industry. They have spawned magazine coverage, game demos, game trailers, and even full on g...
#4 of 25 The Best Wii U Shooter Games 430 VOTES Although Wii U doesn't boast nearly as many shooter games as its competitors, there are still some good shooter games for Wi...
#14 of 15 The 15 Most Difficult Video Games To Beat, Ranked By Gamers 21.1k VOTES If you hope to one day garner respect in convention showrooms and internet forums, there are a few video games you...
#31 of 546 The Best XBox 360 Games of All Time, Ranked 34.6k VOTES The Xbox 360 is one of the most popular consoles of all time, so it’s only natural that fans like you want to know what are ...
#8 of 183 The Best Science Fiction Games of All Time 11.6k VOTES This is a list of the best science fiction games of all time for any console or system, including cover art pictures when av...
#15 of 101 The Best Xbox 360 RPGs of All Time 11.9k VOTES If you owned a Xbox 360 at any time during your life, then it's safe to say there were probably a few RPGs in your collectio...
#10 of 216 The Best Action Role-Playing Games of All Time 90.1k VOTES These are the best action role-playing games of all time for any console or system, including cover art pictures when availa...
12 Times Video Game Heroes Were Destroyed In A Fight 23.5k VIEWS No one ever said video games were supposed to be easy - or predictable. Classics like Dark Souls and Ninja Gaiden - whi...
#5 of 23 The Best BioWare Games List 3.6k VOTES List of the best BioWare games with images, including any well-known BioWare made games for any platform and console. This l...