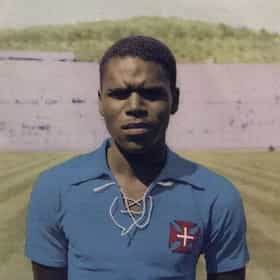 Sebastião Lucas da Fonseca (26 July 1927 – 27 January 2000), known as Matateu (Portuguese pronunciation: [mɐtɐˈtew]), was a Portuguese footballer who played as a striker. His professional career, which spanned more than 30 years, was closely associated to Belenenses. He won the Bola de Prata twice during his spell with the club, and scored 218 goals in 289 Primeira Liga games, being dubbed the World's Eighth Wonder.Matateu's was Belenenses most-capped ever player for the Portugal national team. ... more on Wikipedia

#577 of 1,412 The Best Soccer Players of All Time 3.7M VOTES Whether you call it soccer or football, this extensive list of the greatest soccer players of all time is ranked by&nbs...

Matateu is also found on...