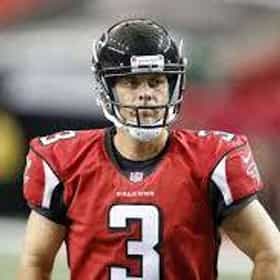 Steven Matt Bryant (born May 29, 1975), nicknamed "Money Matt", is an American football placekicker who is a free agent. He played college football at Baylor, and was signed as an unrestricted free agent by the AFL's Iowa Barnstormers in 2000. Bryant is best known for his 10 seasons with the Atlanta Falcons of the National Football League (NFL), with whom he made a Pro Bowl. He has also been a member of the New York Giants, Frankfurt Galaxy, Indianapolis Colts, Miami Dolphins, Tampa Bay Buccaneers, and Florida Tuskers, and is the eighth most-accurate kicker in NFL history. ... more on Wikipedia

Matt Bryant is ranked on...

Matt Bryant is also found on...