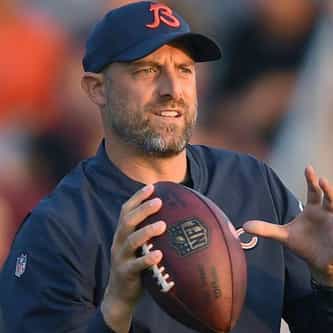 Matthew Nagy ( NEH-ghee or NAG-ee); born April 24, 1978) is an American football coach and former arena football quarterback. He currently serves as the head coach for the Chicago Bears of the National Football League (NFL). As a quarterback, he played college football for the University of Delaware from 1997 to 2000, where he set various school passing records. After failing to receive an NFL contract, he joined the Arena Football League (AFL), where he spent six seasons playing for the ... more on Wikipedia

Matt Nagy IS LISTED ON

#21 of 31
17.8k VOTES The Best Current NFL Coaches
#5 of 10
118 VOTES Every NFL Head Coach Who Worked For Andy Reid
#4 of 19
3.2k VOTES The Best Chicago Bears Coaches of All Time
Famous University Of Delaware Alumni