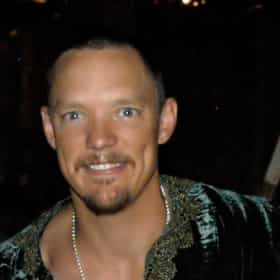 Matthew Lyn Lillard (born January 24, 1970) is an American actor, voice actor, director, and producer. His early film work includes Chip Sutphin in Serial Mom (1994), Emmanuel "Cereal Killer" Goldstein in Hackers (1995), Stu Macher in Scream (1996), Stevo in SLC Punk! (1998), Tim LaFlour in Senseless (1998) and Billy Brubaker in Summer Catch (2001). He played Shaggy Rogers in two live action Scooby-Doo movies, Scooby-Doo (2002) and Scooby-Doo 2: Monsters Unleashed (2004), and in animation, he's been the voice of Shaggy since Casey Kasem retired from the role in 2009.Lillard's later film roles include Jerry Conlaine in Without a Paddle (2004), Dez Howard in The Groomsmen ... more on Wikipedia

Matthew Lillard is ranked on...

#272 of 514 Celebrities Nobody Cares About Anymore 3.4M VOTES Some of the greatest actors of all time have, in recent days, turned into a bunch of washed-up hacks that would be somehow b...
#10 of 29 People who voted for Matthew Lillard... are 5x more likely to vote for Alan Tudyk on this list are 6x more likely to vote for Will Arnett on this list 30 Actors Who Could Make a Great Carnage 13.9k VOTES In Sony Pictures' Spider-Man spin-off Venom, starring Tom Hardy as Eddie Brock, we at long last, get a q...
Famous Tall Men Over 6'2 447.6k VIEWS Some of the tallest men in Hollywood may not seem so on your screen. Paired alongside other tall actors, shorts actors weari...
#17 of 101 Who Is The Most Famous Matthew In The World? 1k VOTES How many celebrities named Matt can you think of? The famous Matthews below have many different professions, as this list in...
#10 of 58 The Best Law & Order SVU Guest Stars 8.6k VOTES If you’re an actor in New York, chances are that you have been or will be on Law & Order SVU. Like the slow heat death o...
All The Celebrities Supporting Pete Buttigieg 42 VIEWS As an openly gay veteran with a degree from Harvard, Pete Buttigieg checks a lot of boxes for democratic voters, some of who...

Matthew Lillard is also found on...