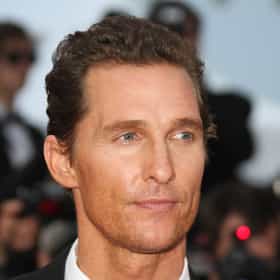 Matthew McConaughey (; born November 4, 1969) is an American actor and producer. He first gained notice for his supporting performance in the coming-of-age comedy Dazed and Confused (1993), which is considered by many to be the actor's breakout role . After a number of supporting roles in films including Angels in the Outfield and Texas Chainsaw Massacre: The Next Generation (1994), McConaughey's breakthrough performance as a leading man came in the legal drama A Time to Kill (1996). He followed this with leading performances in the science fiction film Contact and the historical drama Amistad (1997), the comedy-drama The Newton Boys (1998), the satire EDtv (1999), the war drama U-571 ... more on Wikipedia

Matthew McConaughey is ranked on...

Matthew McConaughey is also found on...