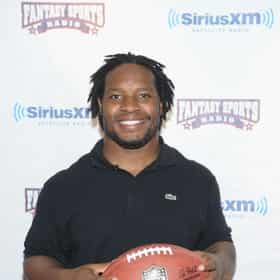 Maurice Christopher Jones-Drew (born March 23, 1985), often called "M.J.D", is a former American football running back who played in the National Football League (NFL) for nine seasons. He played college football for the UCLA Bruins and earned unanimous All-American honors. Jones-Drew was selected by the Jacksonville Jaguars in the second round of the 2006 NFL Draft, 60th overall, was named to the Pro Bowl three times, and led the NFL in rushing yards in 2011. He played his first eight seasons with the Jaguars, through 2013. In his final season in 2014, he played for the Oakland Raiders. Following his retirement, Jones-Drew entered broadcasting, serving as a football color ... more on Wikipedia

Maurice Jones-Drew is ranked on...

Maurice Jones-Drew is also found on...