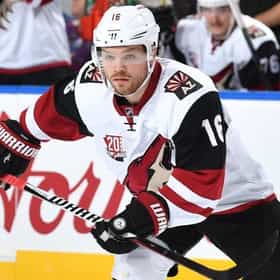 Max Domi is a Canadian ice hockey player who is currently serving as captain of the London Knights of the Ontario Hockey League and is a prospect for the Arizona Coyotes of the National Hockey League. Domi was originally selected eighth overall in the 2011 OHL Priority Selection by the Kingston Frontenacs. He was selected by the Phoenix Coyotes in the first round, 12th overall, of the 2013 NHL Entry Draft. He was born in Winnipeg, Manitoba, but grew up in Toronto, Ontario. His father is former NHLer Tie Domi. ... more on Wikipedia

Max Domi is ranked on...

Max Domi is also found on...