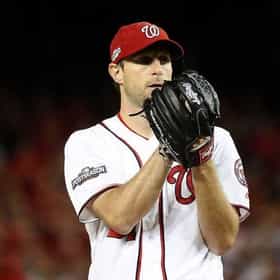 Maxwell M. Scherzer (born July 27, 1984), nicknamed Mad Max, is an American professional baseball pitcher for the Washington Nationals of Major League Baseball (MLB). He made his MLB debut as a member of the Arizona Diamondbacks in 2008, and later played for the Detroit Tigers, prior to joining the Nationals. He has been an important figure in the both the Tigers' and Nationals' playoff presence, including Detroit's four consecutive American League Central titles from 2011 to 2014 and two of Washington's National League East titles, culminating in winning the 2019 World Series as a Wild Card team. A power pitcher with a low three-quarter-arm delivery, Scherzer has achieved numerous ... more on Wikipedia

Max Scherzer is ranked on...

#44 of 198 The Greatest Pitchers of All Time 326.8k VOTES Who are the greatest pitchers of all time? Trying to decide who is the absolute greatest MLB pitcher ever is challenging&nbs...
#49 of 281 The Best Starting Pitchers of All Time 63.9k VOTES The best starting pitchers in baseball history have one vital quality in common: their ability to win. There are so many dif...
#9 of 12 Baseball Players With The All Time Weirdest Superstitions 1.1k VOTES What feels like the most boring moments of baseball are loaded with superstition. Players step to the plate, adjust the...
#9 of 48 Who Will Win the 2019 National League MVP? 2.6k VOTES The race for 2019 National League MVP is stacked. With Bryce Harper and J.T. Realmuto jumping ship to the Philadelphia Phill...
#92 of 202 The All-Around Best Athletes of 2018 32.9k VOTES When it comes to being an all-around best athlete, you're not just talking about the leading scorers of all time, or th...
#2 of 123 People who voted for Max Scherzer... also upvote Dark Knight Franchise on The Best Movies of All Time The Best Current MLB Pitchers 73.5k VOTES Who are the best current MLB pitchers? Who's the most dominant pitcher of the entire season? That remains to be seen, b...
#16 of 81 The Best Athletes of 2013 6.4k VOTES The best athletes of 2013 are the league leaders, most valuable player award winners and widely regarded as the top players ...
#12 of 50 The Most Likable Active MLB Players 1k VOTES Batter up! This is the list of the most likable MLB players currently in the league. Major League Baseball has 162 game...
#2 of 50 Who Will Win The 2020 National League Cy Young Award? 822 VOTES While everyone in baseball wants to win a World Series, the best pitchers in the league will all be competing for the 2...
#17 of 42 The Most Likely 2013 MLB All Stars 3.2k VOTES The most likely 2013 MLB All-Stars are those best players in the MLB today from the National League and the American League ...
#2 of 41 The Best MLB Starting Pitchers of 2014 727 VOTES Who is the best MLB starting pitcher of the 2014 season? This list includes pitchers from teams in both the American and Nat...
#3 of 41 Who Will Win the 2019 National League Cy Young? 908 VOTES UPDATE: Mets starter Jacob deGrom won his second straight NL Cy Young award, beating out finalists Max Scherzer and Hyun-Jin...
#69 of 85 The Best Athletes of 2014 1.4k VOTES Ah... to be the best there is in your game. 2014 was a big year for sports, with major international competitions like the O...
#4 of 71 The Best Washington Nationals of All Time 7.4k VOTES This is a list of the greatest Washington Nationals ever. Before moving to Washington after the 2004 season, the Montreal Ex...
#33 of 157 The Best Detroit Tigers of All Time 33.3k VOTES This is a list of the greatest Detroit Tigers players in team history.The Detroit Tigers are a baseball institution. Formed ...
#6 of 25 The Best Hitting Pitchers in the MLB Right Now 1.3k VOTES Who are the best hitting pitchers currently in the MLB? Also referred to as pitchers who rake, these are the guys who c...
Celebrities With Heterochromia Iridis 4.4M VIEWS Celebrities with heterochromia have a fascinating condition: their eyes are actually two different colors. In some cases, th...
Famous People Named Max & Maximilian 10.3k VIEWS Have you ever realized how many famous people named Max there are? We put together this list of celebrities named Max to s...
The Biggest Contracts in Baseball History 10.9k VIEWS Just when Bryce Harper thought he would go down in the record books with the biggest contract in MLB history from the Philad...

Max Scherzer is also found on...