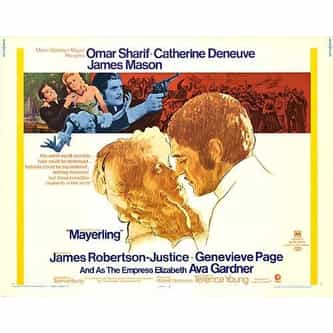 Mayerling is a 1968 romantic tragedy film starring Omar Sharif, Catherine Deneuve, James Mason, Ava Gardner, Geneviève Page, James Robertson Justice and Andréa Parisy. It was written and directed by Terence Young. The film was made by Les Films Corona and Winchester and distributed by MGM. It was based on the novels Mayerling by Claude Anet and L'Archiduc by Michel Arnold and the 1936 film Mayerling, directed by Anatole Litvak, which dealt with the real-life Mayerling ... more on Wikipedia

Mayerling IS LISTED ON