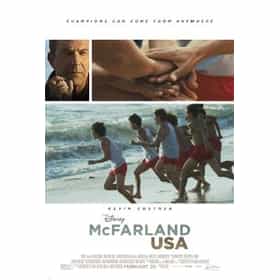 McFarland, USA is an American 2015 sports drama film directed by Niki Caro and produced by Walt Disney Pictures. Based on the true story of a 1987 cross country team from a predominantly Mexican-American high school, McFarland High School, in McFarland, California, the film stars Kevin Costner as Jim White, the school's coach, who leads the team to win a state championship. The film was released on February 20, 2015, received positive reviews from critics, and grossed over $42 million. ... more on Wikipedia

McFarland, USA is ranked on...

#66 of 160 The Most Inspirational Sports Movies 62.6k VOTES From football movies to baseball films, these are the most inspirational sports movies of all time. This list of the best sp...
#22 of 54 The 30+ Greatest Sports Drama Movies of All Time 2.2k VOTES Camaraderie, heart, and a good underdog story are often at the core of a good sports drama. The top sports drama movies tap ...
#18 of 25 The 25+ Best Sports Movies for Kids 2k VOTES There's nothing more exciting than an underdog team fighting to win the big game, especially when kids are involved. The top...
#18 of 21 The Best Disney Movies For Boys 1k VOTES This list contains information about Disney movies for boys ranked from best to worst by user votes. The best Disney movies ...
#194 of 464 The Best Feel-Good Movies 442.4k VOTES Want to feel warm and fuzzy inside? This is a ranked list of the best feel-good movies that make us experience all the good ...
#63 of 68 Good Movies for 11 Year Olds 15.2k VOTES This list has lots of awesome movies for 11 year olds, ranked from best to worst by user votes. The best movies for 11 year ...
#20 of 51 The Best Kevin Costner Movies 19.7k VOTES This list of the best Kevin Costner movies is ranked best to worst and includes movie trailers when available. Kevin Costner...
#31 of 59 The Best Disney Sports Movies 1.4k VOTES It’s time to determine the best Walt Disney sports movies. Whatever the sport, Disney has probably made a movie about it, fr...
#75 of 100 Movies Turning 5 In 2020 619 VOTES Let's take a short walk down memory lane to look back at the movies released in 2015. Believe it or not, they turn five...